Stork´s Nest team is focusing on preserved breeds with historical meaning such as the pig “Mangulica” and the chicken “Sulmtaler”.

Mangulica, a well-known breed is originally from Transilvania (Romania) and Hungaria and got its meaning during the Austro-Hungaro Monarchy period. Its meat shows extremely limited negative colersterol, allowing people with diabetes to consume it.

The Sulmtaler chicken is originally from Styria (Austria) and spread during the Austro-Hungaro Monarchy where Vojvodina was part of it. After the first worldwar it was forgotten for almost 90 years and started in the last decade a reneconse. It is famous for the big and yellowish/redish egg yolk and for the meat. There was a reason, that this chicken breed was also called the Emperor´s Chicken or Kaiserhuhn. In Austria there are some associations, where this chicken is exclusively breeded (www.sulmsteirer.com ).

Beside those mentioned animals does Stork´s Nest farm have a duck breed and duck-egg production and last but not least a Donkey, which is obligatory within our philosophy.

All animals are raised in species adequate shelters and on pasture land, enjoying the variety of food during the entire season. The shelter´s were developed by Teko Inzenjering staff after long studies of species behave and the various requirements.

We are focusing on phyto-treatment (treatment with own-produced naturally plant agents) to prevent sickness, improve the welfare of the animals with the result of top output quality and avoids the need of any pharma or food-supplement products.

Last but not least we have to introduce our pond concept for fishbreeding which we will start in the season 2015- You want to know more about our fish breeding concept, please join the page: http://www.teko.rs/WhatWeDo/Fishery.php

On the intro-picture you can see one of the youngest chicken breeder, Ms. Orhidea, finding herself responsible for the welfare of poultry (chicken and ducks) and rabbits.

We follow the slogan:
!Our clients diserve the highest product quality! 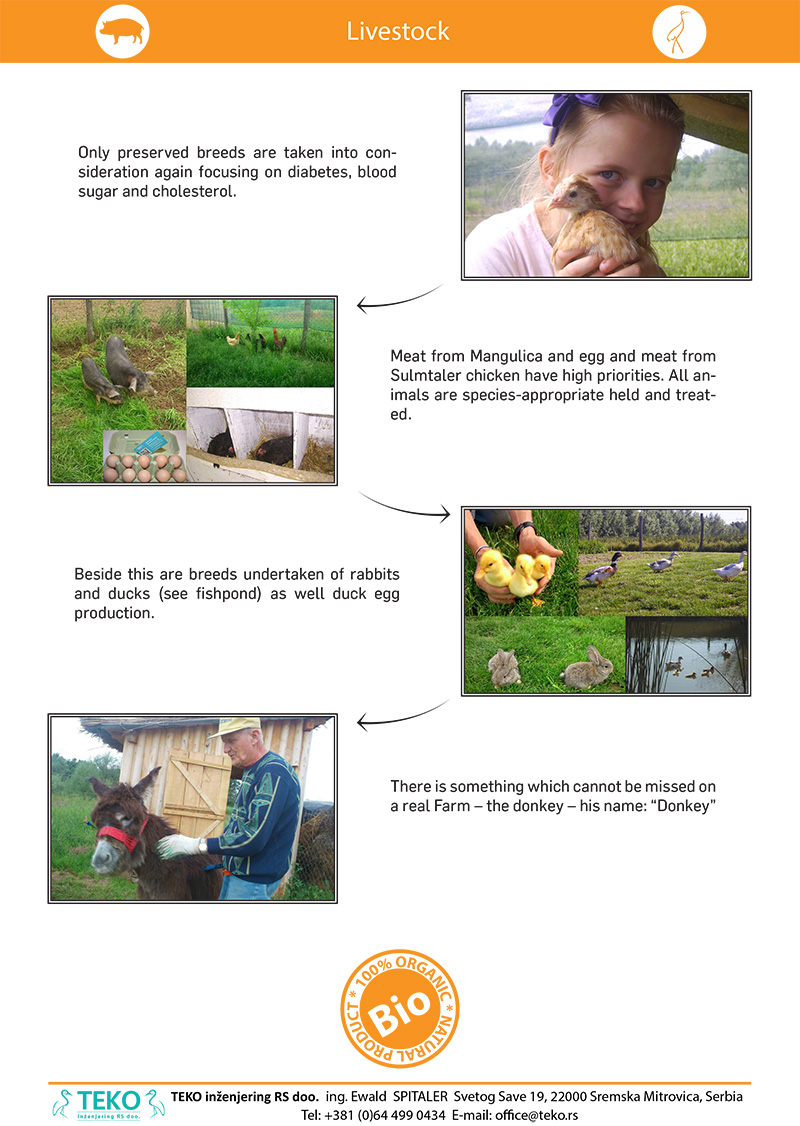